So what's it like starting a brewery in the shadow of one of the largest craft breweries in the country? To be honest, I was nervous from the start. Even though we have a different concept and target market for our beer, I was worried about being seen as invading on New Belgium's turf. I was happy to keep a low profile as we worked to get the brewery up and running but Fort Collins isn't that large and eventually we met Lauren Salazar and Peter Bouckaert at the Odell's expansion party. I did not expect the warm welcome and offers of help we received. Lauren set up a taste panel with our Saison and has introduced us to many other New Belgium employees. Despite being such a large company they genuinely believe in growing the craft beer industry and are willing to lend a hand to that end. It's impressive and humbling.

Thank you to all the New Belgium team, you guys rock.

Federal License in the Mail!

We heard from the TTB that our Federal License is in the mail!

We got back from the Craft Brewer's Conference yesterday. The way back was not fun. Gordon and I were in the last row in the plane. Gordon got stuck with the middle seat and I was on the aisle.

At one point during the flight it looked as though Gordon had entered a zen like state which I assumed was because I stole his armrest and he was avoiding confrontation in such small quarters. It turns out he was actually watching Saving Private Ryan over the shoulder of Thomas from Ska while listing to Dark Star from the Grateful Dead

It seemed as if the entire brewing industry in Colorado on our flight. Gordon noted that if the plane went down beer in Colorado would greatly suffer.

We will have more about the conference this Saturday.

Although we had used the Wyeast 3711 French Saison strain in a blend in our first pilot batch of Saison, I was resistant to use it. My bias against it is that it is not from a Saison brewery or from Belgium. This strain is alleged to be from Brasserie Thiriez across the border in France. A Saison yeast from a Biere de Garde brewery?

Well I can honestly say this strain is the real deal. Where the Dupont strain was fruity, this strain leans more to the spicy side. It also is extremely attenuative, more so than the Dupont strain. In identical worts, the French Saison strain finished a good four significant gravity points lower than the Dupont blend and without raising the temperature above the mid-70's. You would think that a beer that finishes at 1.003 would be too dry and thin in the finish but that is the strange thing about this yeast. There is a fuller mouthfeel to this yeast strain despite it's finishing gravity.

So just when I had our blend figured out we are changing again. It's all good. Yeast is just another tool in the brewers bag of tricks to make a great beer and I'm sure what we learn about various strains will be useful in the future.

A while back I had mentioned various yeast strains we have been trying and I'd like to elaborate further on our results.

We first started our pilot batches using the Wyeast 3724 which is the Saison Dupont strain. This strain is notoriously finicky and after several batches, only one of which attenuated down to the single digits, we abandoned that approach in favor of a multi-yeast fermentation. There has been speculation that Saison Dupont uses a mixed strain fermentation so this was our way of trying to replicate that approach.

We then began doing small fermentations to assess the organoleptic qualities of various yeast strains. Some contenders were Fermentis T-58 (Chimay variant), WLP550 (Achouffe), Lallemand 71B (wine yeast), and Lallemand Assmanshausen (wine yeast). My goal was a blend in which the Dupont strain was dominant and the other strains playing a secondary role. My other goal was a blend that was repeatable and didn't require a large investment in propagation equipment to maintain multiple pure strains.

The blend we eventually came up with was a Dupont/Assmanshausen/T-58 blend. This required the ability to keep a pure culture of the Dupont strain since this strain is only available in liquid form. And since the other two strain are dry yeast strains, there is no need to maintain these cultures. They also have complementary characteristics. The Dupont strain is a fast starter and will dominate the first 48 hours of fermentation as the temperature rises to the high 70s. The Assmanshausen strain takes 36-48 hours to acclimate and begin fermentation and will take off just as the Dupont strain is stalling out. Also, being a wine yeast, it likes higher fermentation temperatures. One drawback to this strain is its inability to ferment maltotriose so a small amount of T-58 helps to clean up at the end of fermentation. Our results with this blend were very good despite being somewhat cumbersome.

One strain I was rather resistant to try was the Wyeast 3711 French Saison. I eventually did and was impressed with the results. I will tell you more about that next week.

All breweries generate waste and a majority of that waste is spent grains. Most brewers find a local farms who then use the grain as animal feed. What do you do with organic spent grains? Find an organic farm of course.

We took a drive up to the Grant Family Farm outside Wellington to discuss the possibility of them taking our spent grain. The Grant Family Farm is the first farm certified organic in the state of Colorado and has been farming organically for more than 35 years. Everyone there was helpful with our questions about the organic certification process and were very interested in the prospect of being able to supplement their organic feed with organic spent grain.

This seems like it will be a win-win situation for everyone.

I attended the Rocky Mountain Microbrewing Symposium last week. This was my first time going to this yearly event and it was a good refresher of information I had learned at Siebel. What really piqued my interest was a presentation by Bob Sclafani on called 'Yeast and Civilization'. This presentation contained one piece of information about some Belgian yeast strains that was completely new to me.

Over time yeast strains have been classified and reclassified over and over again. In the case of lager yeast, it has been called Saccharomyces carlsbergensis, S. uvarum, S. cerevisiae var. carlsbergensis, and now apparently S. pastorianous. Over the past few years the genomes of some yeasts have been mapped and this has brought to light new information about the origins and hybridizations of yeasts strains, and yet more new classifications. What is especially striking is the origin of some Belgian yeast strains. What had always been thought to be just another variation S. cerevisiae is actually a hybrid of S. cerevisiae and a more ancient yeast S. kudriavzevii.

How could this hybridization happen? Although brewing yeast reproduces by meiosis or asexual reproduction under normal conditions, under stress can form spores and reproduce sexually. Think of it as a self defense mechanism. If the yeast is in danger of perishing due to a hostile environment, it sporulates in hopes of preserving it's genetic make-up. Since most fermentations in Belgium were mixed fermentations of various yeasts and some organisms that produced lactic and acetic acid, this may have been perfect environment for this hybridization to take place. How did S. Kudriavzevii get in there? It's possible that it could have been naturally in the environment. Another possible source is oak barrels, or more specifically oak bark where this species has been isolated.

This makes sense, normal variations of S. cerevisiae do not account for the unique properties of most Belgian yeast strain and this information helps shed light on why.

We've begun assembling the equipment for Funkwerks Brewhouse 1.0 over the past month. When I say 1.0, I mean 1.0 barrels. Truly a nano-brewery by any standard but it's a start. This pilot system will enable us to move forward with our licensing and produce our initial batches of beer. This system has step mash capability enabling us to use various grains and adjuncts. We will also utilize the more traditional open fermentation.

Our first fermentation with our new three yeast blend went very well. Unfortunately, that beer was destined to be aged on Brett so we will have to wait until batch 7 is finished to get a more accurate comparison to our previous batches. We are also trying the French Saison yeast as a possible house yeast. It has some advantages over the Dupont strain from a production stand point. I have a soft spot in my heart for the Dupont strain despite it's quirkiness. We will see how the French Saison yeast compares. 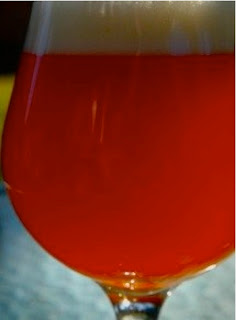 Why Saison? From a personal perspective, the Saison style has fascinated and perplexed me for years. Before we examine why, we need to examine what is a Saison.

With most Belgian styles you can map out a trend of all commercial examples. All styles have a certain alcohol content, flavor profile, etc. But what about Saison? What, if any, commonalities are there to the style? Well, if there is one common characteristic to the style it is the attenuation. Saisons have attenuations exceeding 90%. This lends a dry finish to a flavorful beer. And what is the flavor? That depends on the beer. Saison Dupont is a very bitter yet fruity example. Saison Papaix is more dry with a mineral edge. Fantome is less fruity but more of a lactic acid edge. Essentially, a Saison is a dry beer with a character unique to the brewery where it is made.

So, why Saison? Saison is a style that has yet to reach it's potential in the U.S. Many American examples are over-spiced and under-attenuated and lack the true character of the style. Many Belgian examples are unfortunately well past their prime. We believe we can do better. Beer lovers deserve a truly authentic Saison

Work has begun on our brettanomyces-laced Saison (aka Brett Dream). This beer is a golden Saison of about 6.5% alcohol fermented with our house multi-strain yeast blend then aged on Brettanomyces Clausenii. Our goal is an interesting blend of tangerine, pineapple, pepper, and brett funk. We'll see what happens..